Things I’d Have at My Bookish Party

My birthday isn’t until June (9th), but it’s never to early to start planning. So for this week’s theme, I thought I’d share some characters I’d invite to my birthday party. 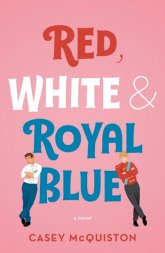 Alex is such a witty, funny character that I feel like he’d make me laugh all the time. Having both him and Henry at a party would be great fun and I’d attempt to become their friend (because let’s face it, they’re awesome and who wouldn’t want to be their friend).

I feel like Imogen and I would instantly be good friends. We both love animals, bright colours, and both have a lot of energy.

Plus, she could use her hair chalks to colour my hair and we could plan our next space/time adventure.

Winnie from My So-Called Bollywood Life

Winnie is so bubbly and friendly that I would definitely want to hang out with her at my party.

Lila and Kell from A Darker Shade of Magic

At risk of derailing my own party, I would love to have Lila and Kell there to hang out with and cause mischief.

Tara and Darcy from Heartstopper

I love Tara and Darcy so much and I know I’d have an amazing time hanging out with them.

Miyoung and Jihoon from Wicked Fox

I feel like Miyoung and Jihoon would bring a little magic to the party and perhaps some angst and drama, but

So there are my 10 party guests. Which characters would you invite to your birthday party?