April 9: Outrageous/Crazy/Uncharacteristic Things I’ve Done for the Love of Books

I wouldn’t say I’ve ever done anything too wild for the sake of a book, but I’ve certainly done a few unusual or extra things for my faves.

1. Taken a suitcase to a signing 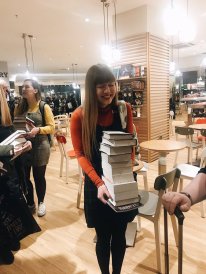 Yes, I took a suitcase on a one-hour train journey to the V. E. Schwab signing last month. I had 9 books for V to sign, and at first I felt really guilty about taking a case.

But when I got to the front of the queue, she seemed to happy to see me and sign all 11 of my books (I bought two more in Waterstones, don’t give me that look) so I stopped feeling bad about it. Plus, it really saved my back from carrying them round all day.

If anyone knows Jamie-Lee on Twitter, you’ll know that she adores cats. She often jokingly says that if you want to request a proof, sending cat photos never goes amiss.

So when she tweeted saying copies of the UK Spinning Silver paperback were in I emailed straight away to request a copy. And followed up that email with one filled with cats. Shameless. I know.

3. Got someone to hold my place in a queue at YALC while I ran off to enter a competition

Last summer at YALC, I was desperate to try and win a copy of Tempests and Slaughter, but the giveaway ended up happening while I was in a signing queue.

I voiced my stress to my friend who was also in the queue, and the girl behind us piped up that she’d be happy to hold our spaces if we wanted to go and enter the competition.

These random acts of kindness are why I love the book community. Because a stranger offered to hold our spaces, we were able to go and enter the competition, and I ended up winning an ARC.

4. Waited over 3 hours in a signing queue to meet authors

When I went to the Becky Albertalli and Adam Silvera event last autumn, the signing queue ended up being huge. There were at least a hundred (or more) people there and we ended up being near the back of the queue.

As a result, we waited about 3 hours (maybe slightly more, it’s a blur now because I was ill at the time) to meet them, but it was 100% worth it. They were both lovely and it was so good to talk to them, even just for a few minutes.

5. Collected multiple editions of the same book from different countries

If I love an author or a series, I’ll collect multiple editions of their work.

There’s something so satisfying about seeing different versions of a book on your shelves, and I’m a huge fan of international editions because they often have amazing cover art.

6. Stayed up until 2am on a week night finishing a review for a blog tour

This isn’t the latest I’ve stayed up for a book, but it was a weekday and I had to be up at 6am, so I should have really gone to bed earlier. But because I wanted the review to be just so, I stayed up late and continued editing it.

It was worth it in the long run though because the blog tour was a success, and the author loved the review.

7. Asked my family in Germany to ship my German copies of ADSOM to the UK 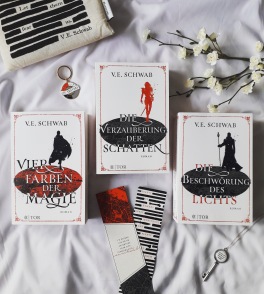 When I was in Germany over Christmas, I ordered the German editions of A Darker Shade of Magic and got them delivered to my aunt’s local bookstore.

Unfortunately, they arrived late because of the New Year holidays, and I couldn’t collect them before I had to fly back to the UK.

So I asked my aunt if I could leave her money to send them back to me. And like the saint she is, she said yes.

8. Asked American friends if they’d letting me ship a book to their address

Sometimes Barnes and Noble/other US-based companies only ship to US addresses, which is a bit of a kicker when you want to order a US edition but live in the UK.

And thirsty as I am for US editions of V. E. Schwab’s books, I asked some of my US friends if I could post the book to their address, then send them the money to post it on to me.

The things we do for the books we love.

9. Threw my feelings at Patrick Ness while in a toilet

We ended up walking parallel to each other out of the toilet exit, and I just blurted out, ‘Oh! Patrick Ness! I’m so excited to read your new book.’

He thanked me and was very courteous, but looking back, I think ‘Kate WHAT were you doing?!’ The man just wanted a toilet break and you yelled your feelings at him. Not cool.

10. Hidden books in my wardrobe so my parents won’t find them

Although my folks are supportive of my blogging, and my Mum is often keen to see what books I’ve got in the post, my Dad thinks I own too many books. At least once a week he asks: “when are you getting rid of some of these books?”

He claims that if my books are tidy (they are) he wouldn’t mind so much, but really I think he just wants my room to be less full of them.

So, to combat his constant questions, I started hiding books in my wardrobe. I made three neat piles of mainly books I’m not as interested in anymore (sorry ACOTAR) and so far, he hasn’t found them.

It’s a win-win situation; he thinks I own fewer books than I do, and I get to keep buying/receiving them without questions.

Have you ever done anything unusual or wild for the sake of a book? What are some of your most unusual reading/book buying habits?