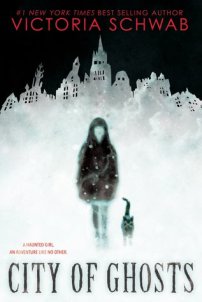 Cassidy Blake’s parents are The Inspectres, a (somewhat inept) ghost-hunting team. But Cass herself can REALLY see ghosts. In fact, her best friend, Jacob, just happens to be one.

When The Inspectres head to ultra-haunted Edinburgh, Scotland, for their new TV show, Cass—and Jacob—come along. In Scotland, Cass is surrounded by ghosts, not all of them friendly. Then she meets Lara, a girl who can also see the dead. But Lara tells Cassidy that as an In-betweener, their job is to send ghosts permanently beyond the Veil. Cass isn’t sure about her new mission, but she does know the sinister Red Raven haunting the city doesn’t belong in her world. Cassidy’s powers will draw her into an epic fight that stretches through the worlds of the living and the dead, in order to save herself.

City of Ghosts is Victoria Schwab’s first paranormal middle grade novel and, like all her other books so far, she kills it. Almost literally, in fact; City of Ghosts is a story about death, ghosts (shocking), friendship, and adventure.

As you’d expect from one of V’s novels, the writing style is exciting and fun. It’s not quite at the same level as A Darker Shade of Magic, but that’s mainly down to the intended audience. Schwab’s tone is aimed at middle grade readers, but her style is open and varied, making it engaging for all ages. (Take it from someone in their twenties who thoroughly enjoyed it).

The narrative is a clever balance of playful jokes and dark descriptions of the world beyond the veil. Edinburgh is rendered beautifully in our imaginations and it’s clear that the Schwab loves the city. The streets, gardens near the station, and nuances of the city centre are captured inquisitively, building the world of the book up gradually. Although the descriptions of the castle and royal mile become a touch too romanticised at times, realism is maintained in the dankness of the underground vaults and unnerving atmosphere of the graveyard. If you’ve been to Edinburgh a few times, the narrative makes it easy to pinpoint some of the locations, but at other times the map in the front of the book comes in handy (and it’s lovely, so drool away).

Cass is the kind of main character you immediately want to be friends with. She’s young, but pragmatic, warm, witty, and open-minded about the fact that she can see ghosts on a day-to-day basis. She humours her parents, who can’t see them but believe resolutely nonetheless, and some of the ironic moments in the book come from them not knowing her secret. Although her naivety gets her into hot water (more than once), her intentions are always good and inevitably draw people to her.

Competing for the title of ‘my fave’ is Cass’s best friend Jacob – resident ghost of the Blake family. Jacob’s humour and antics made me laugh frequently and his friendship with Cass was one of the things I loved most about the novel. There’s no unnecessary romance, no uneasy dynamics between them as they discover their attraction, and no flirting. They’re best friends first and foremost, and it’s wonderful. Their friendship is the driving force behind a lot of action-packed moments in the book, and they save each other time and time again because of that bond. If you’re not busy next week, get yourself a friendship like Cass and Jacob’s.

The light-hearted moments in the book are offset by some equally dark moments as Cass discovers more about her ability and meets Lara, who can also see ghosts (but has none of Cass’s tolerance for them or charm). The pacing speeds up as the plot progresses and moral questions are thrown up about who should have the power to ‘play god’ and what it means to be truly alive.

The book descends into darker tones still with the entrance of the Red Raven, and like all Schwab villains, she’s more than a match for the hero, which is what makes her so chilling. After all, what’s a story of good vs evil without a villain who might win? Although I wasn’t a huge fan of the name Red Raven (sounds a little gimmicky to me), her abilities and motivations made her real threat, and the kind of dark character you wouldn’t want to meet in a gloomy Edinburgh alley.

I went into City of Ghosts expecting great things from my favourite author, and I wasn’t disappointed. Although the book didn’t quite have the same impact for me as ADSOM or Vicious, I was enthralled by the plot and fraught with tension during the action scenes. I’m hugely fond of Cass and Jacob (I will fight anyone who tries to hurt them), and although there’s been no word yet on where book two will be set, I can’t wait to see where their adventures go next.