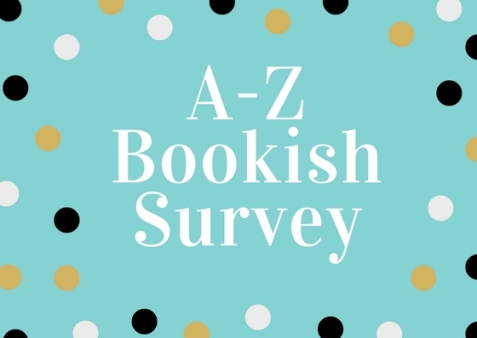 I haven’t done a tag in a while and when Hollie @hollieblog tagged me in this one, I knew it was going to be too fun to miss.

Author you’ve read the most books from:

According to Goodreads it’s Tite Kubo, the mangaka of Bleach.

That’s a tough one, but I’d go with either ACOMAF (which was undoubtedly the best book in the series for me), or A Gathering of Shadows.

Drink of Choice While Reading:

I recently got a new phone that actually has the storage space and battery life to allow me to read e-books on my phone and I’m finding it a little bit revolutionary. Having said that, the answer will always be physical books.

Fictional Character You Probably Would Have Actually Dated In High School:

I would have totally dated Rishi from When Dimple Met Rishi. He’s such a soft boy, and is thoughtful and understanding, as well as a feminist. Plus, if he took me to a book-themed restaurant, like he does with Dimple, I would probably have had to lie down in wonder.

Glad You Gave This Book A Chance:

I was lucky enough to win an ARC of Things A Bright Girl Can Do by Sally Nicholls at YALC in 2017 and I’m so glad I picked it up. It’s a historical fiction novel about women’s emancipation and fighting for the vote before and during WWI, and it contains a f/f relationship that was a joy to read.

I read The Arsonist by Stephanie Oakes last year and it. was. amazing. It’s an enthralling mystery spread over multiple decades and generations and features one of the best friendships between a boy and a girl that I’ve read in ages. Cannot recommend it enough.

Important Moment in your Reading Life:

When I finished A Conjuring of Light in 2017. I sat on my bed and cried because it had such a perfect, fulfilling ending. It had been the most stunning series I’d ever read and had made me feel so much for the characters and world and I had finally come to the end of it. And I was both overjoyed by the way it had ended and incredibly, inconsolably sad that I’d never get to read it for the first time again.

An Enchantment of Ravens by Margaret Rogerson

Kinds of Books You Won’t Read:

I don’t tend to read adult contemporary romance novels and crime thrillers, not because I don’t think I’d like them, they just don’t excite me as much as other genres.

I read Middlemarch at university and that was 904 pages. It could have been 504 pages and would have been better for it to be honest. *massages temples* I’ve also started A Storm of Swords, which is 1177 pages in total, but I’ve only read part 1 and the first half of part 2 so I this doesn’t count (yet).

Major book hangover because of:

A Conjuring of Light almost gave me a complete book hangover because it was incredible and I felt like no other book was ever going to live up to it. I had reached peak book. But thankfully the feeling didn’t persist for too long and I was able to start reading other books soon after.

Number of Bookcases You Own:

Two, but this would probably be four if my parents would allow it.

One Book You Have Read Multiple Times:

I rarely re-read books because I have so many to get to, but I re-read manga frequently because it’s shorter and I swear I’ve read Bleach volumes 19 and 20 about 7483747 times. They’re iconic. I’m definitely planning on re-reading the Shades of Magic trilogy this year though because it’s my fave.

I’ll read anywhere, but I like sitting on our sofas. They’re new and chunky and I can snuggle into a corner with a book for hours.

Quote that inspires you/gives you all the feels from a book you’ve read:

“I’d rather die on an adventure than live standing still.”

Haha, Zenith. *sigh* If you want to know why, go and have a nose at my review.

Series You Started And Need To Finish (all books are out in series):

Three of your All-Time Favorite Books:

First of all, how dare you because it’s almost impossible to narrow it down to three. Second of all:

A Darker Shade of Magic by V.E. Schwab (and the entire trilogy, basically)

Six of Crows by Leigh Bardugo

The Book Thief by Marcus Zuzak

I basically had to shut my eyes and choose at random for these, because there are so many other books that I adore. But nonetheless, these are some of my most loved books.

Very Excited For This Release More Than All The Others:

My most anticipated release for 2018 is Children of Blood and Bone by Tomi Adeyemi. I need it in my eyes, now.

Reading 3+ books at once and gradually putting one of them aside and eventually just stopping reading it. Thankfully, I no longer do this, because I’ve started making myself read only one book at a time (or one paperback and one ebook on my phone) but I used to be terrible for not finishing a book because I’d started too many others.

I went to see Alwyn Hamilton in conversation with Mariam Khan earlier this week, and I bought her newest book (and the third in her Rebel trilogy) Hero At The Fall. At the end of the event, because Alwyn is a sweetie, she did a signing and I got it signed and personalised. ❤

ZZZ-snatcher book (last book that kept you up WAY late):

Vicious kept me awake when I read it because there were so many subtle twists and sub-plots that just HAD to know what was coming next.

If they’d like to do this, I’m going to tag the lovely:

If want to do the tag too, feel free to drop me a link me to it!