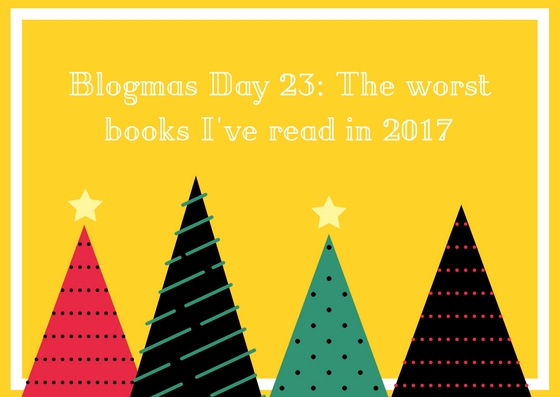 With only 8 days left of 2017, I was ruminating on the poetry, graphic novels, short stories, and novels I’ve read this year. Some of them have been wonderful and uplifting. Some have been exciting and action-packed. But some have been pretty poor.

So as we all do towards the end of the year, I’m rounding up the best and worst books I’ve read this year. Just to clarify, these won’t all be books that have been released this year, and this is just my opinion. If I disliked a book, that doesn’t mean it’s a bad book. It just means it wasn’t to my taste. If you loved a book on this list, the fact that I didn’t like it in no way invalidates your enjoyment of it. It just shows that we all enjoy different genres, characters, and types of writing, which is what makes us unique as readers.

All the books on this list are novels I rated 2.5 stars or lower. While this list isn’t in any particular order, you’ll probably be able to guess which books I liked the least. And, yes, there are going to be some unpopular opinions. Let the tea spilling commence.

I got an ARC of this at YALC during the summer, and was excited to start reading it, but it definitely didn’t live up to the hype. The idea of an all-women pirate crew in space was a great concept, but the execution was terrible. The writing was ungainly, cliched, and lacked fluidity, and the plot jumped around without any real direction. I didn’t feel any connection to the characters and when one of the protagonists almost died I couldn’t bring myself to care. (Which is very unlike me.) Honestly, for most of this book I was bored and I couldn’t wait for the end to come fast enough.

A Shiver of Snow and Sky

This was another ARC I managed to win at YALC and, again, it missed the mark. I liked the Nordic inspiration, but there were too many contradictions in the world-building and the plot was too simplistic. The different communities used different languages but it was never explained how some could speak both languages, but others couldn’t. The languages themselves were never explained in much depth and it felt like a missed opportunity. Romance was a big part of the plot but no chemistry between two of the main characters, whose relationship was meant to be burgeoning.

Rating: 2.5 stars
Times almost DNF’d: Only 1 because it was so short.

The issue for me with Dr Jekyll and Mr Hyde is that I already knew the outcome of the story. It’s a well-known and well-discussed piece of literature, so over the years, I’ve come to know the basics of the story, and the ‘twist’ didn’t come as a surprise at all. On top of that, the writing is archaic and I found it difficult to connect to the characters and the writing was long-winded and inert.

I didn’t dislike Everless overall, I was just closed the book feeling very apathetic. The ending had a disappointing lack of resolution and only seemed to be there to set up the sequel. Almost all the characters were one-dimensional and I saw too many of the usual YA tropes being used in the same way as always. The love triangle. The evil Queen. The rags-to-riches plot. The only one I enjoyed was the enemies-to-friends trope, which I’m always a sucker for. Additionally, the main love interest smelled of pine and I’m JUST DONE WITH SUNSHINE/SANDALWOOD/PINE SMELLS. Pine is cancelled. I knocked half a star off for that.

Unfortunately, I really didn’t enjoy this book. The writing was poor, the characters were dull, and there were so many inconsistencies that after a while I stopped taking count. The plot had no cohesion and the dialogue lacked fluidity; sometimes it was just downright bizarre, with characters making comments that had no relevance to the scene. Plus, the magic system and five new critical characters were only introduced half way through, disrupting any pace and world-building that had been set up.

There were also too many errors that should have been picked up during editing and detracted from the book’s overall professionalism. I’d hoped the LGBTQIA+ romance would be the story’s saving grace, but there was an instance of internalised homophobia which remained unchallenged and completely threw me off balance when reading. This spoiled the romance for me and left me feeling uncomfortable and desperate to get the book over with.

What are some of your least favourite books of the year? Do you agree or disagree with me on any of these? Let me know!