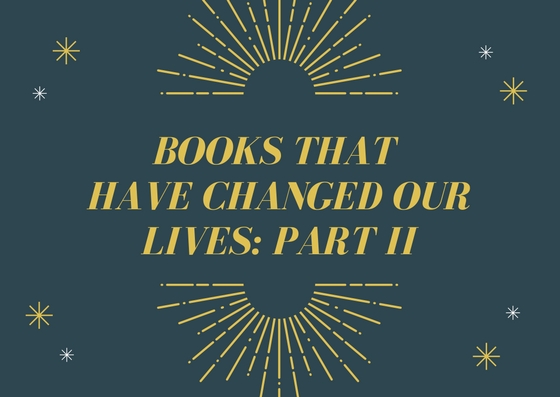 A couple of days ago I posted Books That Have Changed Our Lives Part I, highlighting some of the responses I got on a twitter poll that asked readers which novels had been life-changing for them.

As I mentioned in Part I of this post, A Darker Shade of Magic is the series that changed my life. V. E. Schwab’s magical tales about four different Londons captured my imagination like no other series and lifted me up with hope and optimism when I needed it.

The responses to the Twitter poll were so wonderful and overwhelming that I couldn’t fit them all into one post, so here’s part II.

Liv @Livescape chose Me Before You and The Hate U Give (the latter of which is a very important book and I’d definitely recommend picking it up).

Me Before You by @jojomoyes & THUG by @acthomasbooks both made me think a lot which I loved!

Becca @BrunetteBlogg went for the classic, A Christmas Carol.

A Christmas Carol. I would have never started reading again if it weren't for that 😍👌🏼

Reasons to Stay Alive by @matthaig1. Powerful discussion on mental health. Has strengthened my resolve to beat my anxiety.

Douglas Coupland's "Life After God". I've never had any book get inside my head and describe depression as well as he did. Stunning book.

When Dimple Met Rishi. Only a couple of pages in and I could relate to Dimple and her family.

It wasn’t just one book but a whole series for Theo @TheoPotterHead.

the closest i can get to life changing is the gallagher girls series by ally carter! it's the episode of girls supporting girls for me

Jacob and Roxie @Rocksmysocks307 went for The Help.

Sia @siasiasia‘s choice of The Star of Kazan inspired her to travel abroad.

The Star of Kazan by Eva Ibbotson. Inspired me to go to Vienna when I was 19, and then I studied German just to live there

Joey @JoeyRelton suggested the well-known and well-loved The Hunger Games.

The Hunger Games, first time I've read 3 books in the space of a few weeks – a big feat for a dyslexic :')

A Thousand Splendid Suns. It made me want to write about it so much that I argued with my sixth form to make it my English coursework!

And Tim @irishtinker052 offered two books: Being There and Shaving the Inside of Your Skull.

I have two Being there by. Jerzy kosinski and shaving the inside of your skull by mel ash. Both are great reads .

As with Part I of this post, readers have offered some excellent books and it’s been insightful to read about how/why certain books have changed their lives. I’ve loved creating both parts of this blog post because each reader’s reasoning for their choice has inspired me to reevaluate my own parameters for what makes a book ‘life changing’. Not only that, but it’s been great to share the love and positivity that others feel towards their chosen books.

I’d love to hear if you enjoyed these blog posts, and if you think I should do something similar again in the future!

2 thoughts on “Books That Have Changed Our Lives: Part II”