Last weekend, my friend Jennie came down from Saitama to visit Kyoto and Osaka. We’d had it arranged for a while so I was really excited to see her.

Our plan was to go to Kyoto for two days, since we’d both never visited the city, then I’d show her around Osaka for two days and she’d stay with me in the peace house (where I’m working).

On the first day I caught the train across to Kyoto on the Keihan line, and met up with Jennie just before noon. We headed for Ginkaku-ji, the Silver Temple (‘gin’=’silver’), which is famous for representing the Higashiyama Culture of the Muromachi period (15th century). 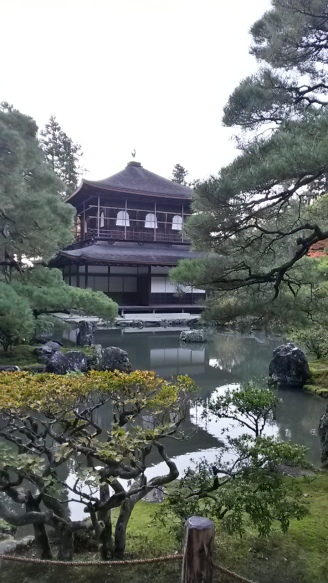 An adjacent pavilion in the grounds

Ginkaku-ji (left, above) was built after Kinkaku-ji (the ‘Gold’ Temple, not pictured), and is thought to have been based on its architectural style. Both temples were built as places of respite and relaxation for the Shogun of the era.

Visitors cannot go inside the temple itself, but can walk through the grounds, enjoying the other pavilion buildings and gardens (the views above were from the gardens). While there, my friend and I were approached by a friendly group of Japanese women, who were interested in where we were from. Jennie speaks better Japanese than I do (mine is sadly still very basic), so she told them we were from the UK, but were both here working. In a mixture of Japanese and English they then told us we were very cute (!) and pretty (!!) and then joked on about how much younger than them we were, dubbing themselves our Japanese mothers!

They asked if they could have some photos with us, so we happily obliged before heading on our way. Despite everything we saw that day, meeting that group was definitely one of my highlights. They were so friendly and fun to talk to (despite language differences), further reinforcing my view that Japanese people are incredibly warm and kind to foreigners.

After leaving Ginkaku-ji, we had a look through some of the shops on the main road down from the temple and bought ourselves and our families/friends a few gifts. Then, we took The Philosopher’s Walk back down into the city centre.

The Philosopher’s Walk (below) is a quiet, secluded road running parallel to a small river that leads away from the Silver Temple. It’s flanked on either side by lovely, small Japanese houses, with a few shops dotted in between. There were also plenty of trees on the route and, due to the ‘autumn leaves’ season (as they call it here), all were wonderful shades of red, orange and yellow. Our walk was made even more beautiful by the fact that the sun was setting and bathing everything in gold light.

Once we reached the main part of the city, we headed for Gion, the Geisha district. Jennie was looking for omiyage (in Japan these are souvenir-type presents for work colleagues) so we browsed some of the shops, which were all pretty eclectic and incredibly cool. Jennie was very taken with the Hello Kitty shop, which sold all kinds of HK accessories, whereas I was excited by a shop selling hand-crafted jams and biscuits/cookies (Japanese food is where it’s at, no offense Hello Kitty).

Sadly we didn’t see any Geisha, but in hindsight I think we needed to go further into the district to be in the best area for sighting them. It’s also something of a misconception that Geisha are everywhere; there aren’t anywhere near as many practicing Geisha now as there were a hundred years ago, so it’s quite rare to spot them. Having said that, I’m planning on visiting Kyoto again in the next couple of weeks to see more of the city, so I’m hoping to see at least one Geisha then.

After walking through Gion, we crossed the river into Ponto-cho, an bustling old-fashioned street lined with tea houses and restaurants. Ponto-cho is a Hanamachi district, famous for retaining most of its architecture and entertainment in a way that few other streets in Kyoto have.

We decided while there that we were both starving, and that it was 100% dinner time. After some epic dithering (because we couldn’t decide what we fancied, and I’m a vegetarian so we had to check the menus for veggie options) we chose a restaurant that looked really cosy and had a huge menu.

There was a 500 yen service charge, which surprised us slightly (because it’s quite unusual in Japan) but once we got inside we realised why. The restaurant was styled like a traditional Japanese tea house, with floor level tables and seats (below), and several private rooms for dining. The whole place was serene and it backed directly onto the river, so we had a fantastic view of the water and the Kyoto streets at night. We also got a free starter and hot towels which were great. So the service charge turned out to be very much worth it in the end! 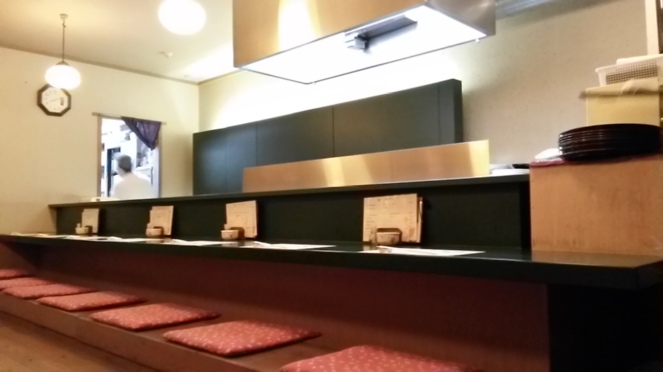 Once we were watered and dined and had rounded up a lovely long chat, it was getting quite late. Jennie had booked a guest house in Kyoto, whereas I was getting the train back to Osaka, so we parted ways for the evening.

That was the end of my first day Kyoto! I’d love to hear if you’ve ever visited Kyoto, or if you plan to one day! Which temples/shrines/attractions would you like to visit most? As you’ve probably noticed from the title, this is part one of a two-part post, so watch out for the second part, which will be coming soon!

3 thoughts on “Exploring Kyoto part one: Ginkaku-ji, Gion and Ponto-cho”