Hello from Osaka, Japan! After month of planning and preparation, I finally flew out on 7th October.

My journey involved two flights; a 1 hour flight from Manchester to Amsterdam, and then a connecting 11 hour flight to Osaka. The flights themselves were good (I watched Star Trek: Beyond on the long hall flight and loved it), but the most special moment was definitely when we descended below the clouds in Osaka and I saw Japan for the first time. The mountainous skyline and cityscape were exactly as I’d seen them in videos and films, but this time I wasn’t watching from thousands of miles away, I was here.

Once out of the airport, I hopped on a train (more like clambered on with my suitcases and bag) and headed for Tennoji, which was the area I would be staying in. My friend had mentioned the great view from the train, but I wasn’t quite prepared for travelling over the glistening expanse of sea (Kansai airport is slightly off shore), before coming inland to greet the mountains and network of houses and buildings that were just so wonderfully Japanese.

At Tennoji station, I discovered that the guest house was a little harder to find than expected. I must have looked reasonably lost (and with my blonde hair I immediately stand out as a foreigner), because an elderly Japanese man approached me and asked where I was going. I showed him on the map and he seemed to know where it was, offering to drive me there. Normally I’d be incredibly wary about this kind of thing, and would usually always turn down lifts from people I don’t know. But in this instance, I’d already been well-informed by friends and research that Japanese people are incredibly helpful and will try to aid foreigners if they’re lost. 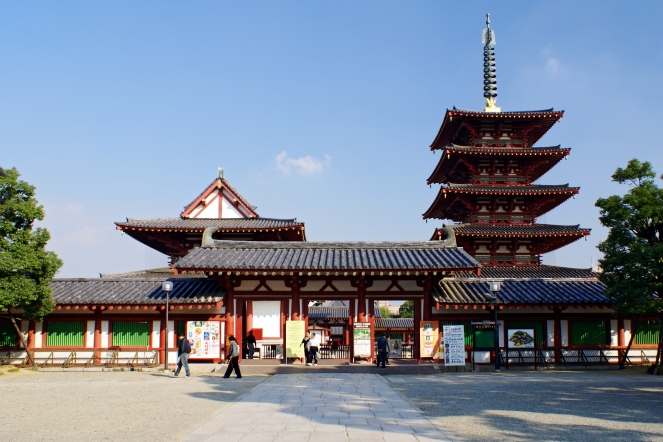 With this in mind, as well as the fact that I was pulling two suitcases in 28C heat, and wasn’t sure I was on the right road, I decided to accept the offer. Despite clear language barriers (he spoke almost no English and I only speak a little Japanese), we managed to talk about two English football teams from where I lived and the man listed several other English clubs he knew of. He stopped twice to double check directions with other people passing by and within five minutes he was pulling up outside the peace house.

This complete stranger, who’s name I didn’t even know, never once made me feel uncomfortable and didn’t want anything in return for the lift (as soon as we arrived he trotted off down the street merrily shouting ‘bye bye’). As far as first impressions of go, this was odd and hilarious at the same time. It was lovely to find that everything people say about Japanese people being helpful to others is true.

The peace house itself is a wonderful little building, sequestered away down a narrow street with an ornate wooden door and welcome sign. The rooms are quite traditional with sliding doors and tatami flooring. And you have to make sure to leave your shoes at the front door! The other people working here are from different countries across the world and are very friendly; I already feel like we know each other quite well and this is only my second full day here.

Currently, I’m still pretty jet-lagged; last night I woke up at 4am and no matter how hard I tried, I just couldn’t get back to sleep because my body’s still adjusting from English time. Eventually at 6.15am I gave up and went to see the sunrise on the rooftop, before going for an early morning run. Hopefully I’ll be able to catch up on sleep tonight without the same problem! (The photo below was taken just after sunrise this morning.)

The neighborhood seems full of little delights such as takoyaki and teppanyaki restaurants and public baths. The stores sell all manner of incredible foods that I’ve (unsurprisingly) never seen before at home, today for example I bought a green tea biscuits and steamed bun that came with a pokemon card. The steamed bun was lighter than air and the green tea biscuits are like Viennese whirls, but better. I also saw anime candy and unusual dried fruit, like tomatoes and kiwis.

The other volunteers working at the guest house have been showing me how everything works over the last two days, and tomorrow I have the day off. I’m planning to spend it visiting Osaka Castle or Sumiyoshi Taisha, one of the oldest Shinto shrines in the whole country. Whichever location I decide to visit, the day will hopefully be spent taking lots of photos and eating lots of delicious Japanese food!

7 thoughts on “Arriving in Japan”