In honour of yesterday’s fantastically flower powered episode of Bake Off, I thought I’d share my version of the Bake Off Book tag with you guys. I found this tag over at KirstyTheCatRead and it was originally created by ReadingwithJack so if you’ve got some free time definitely check both of them out!

The tag is themed around The Great British Bake Off, a show where amateur cooks bake different culinary delights each week in an endeavor to be crowned Bake Off Champion.

The show is currently airing its seventh season and my goodness is it brilliant. You’ve never witnessed cooking and innuendo combined together like this. If you’ve not watched the show I’d implore you to give it a try; it’s wonderfully entertaining and I’m absolutely hooked.

CAKE: The cake has sunk in the middle. Pick a book that didn’t rise to your expectations.

I read With Malice recently and it just completely fell flat for me. I didn’t empathise with the characters and the plot wasn’t particularly exciting, despite the premise sounding good. You can read my full review here.

BISCUITS: Once you’ve eaten one, you’re hungry for more and each time you eat another, they get more and more delicious. Pick a book series or trilogy that got progressively better.

For this one, I’m going to have to go with one of my favourite series, Throne of Glass. This series has just gone from strength to strength and with each book I’ve become more and more attached to it. I’m about to start Empire of Storms (finally!) and I honestly think my heart might burst if I my love of this series increases again, but I’m sure SJM ill find a way to make me love it even more than I already do.

BREAD: Kneading dough requires hard work and determination. Pick a book that you put off reading for ages and needed a lot of determination to pick up.

I’ve put off reading this book so hard that I still haven’t actually read it (whoops). Initially, it was because I didn’t want the series to end, but then it was because I was disappointed by the film and didn’t feel like reading it, and now it’s been so long since I read the fifth book that I can’t remember much of what happened. I also have so many other books I want to read that this has become less of a priority on my TBR. I do, however, want to read Lady Midnight, and I have to finish this before I can get to that, so hopefully within the next few months, I’ll finally get round to it!

DESSERTS: Foreign deserts such as crème brûlée and Spanische Windtorte are on the menu. Pick a book set in a foreign country.

The Alchemist is set in both Spain and Egypt and is one of the most inspiring pieces of tranformative fiction I’ve ever read. It was so good that I read it in one sitting while on holiday and would recommend it to anyone. The rich description propels you into the two countries and the burgeoning optimism of Santiago makes you root for him from the beginning.

ALTERNATIVE INGREDIENTS: Not usually used, but surprisingly good. Pick a book from a genre you wouldn’t normally read but ended up loving.

I specialised in the study of Accents and Dialects during my MA degree, so when I read the title of this novel I knew I had to read it. It’s a family-themed contemporary, narrating the lives of several generations, but focusing on four sisters. I do sometimes read this kind of book, but isn’t my go-to genre (which is fantasy of course).  I did, however, end up enjoying this book a great deal; the relationships between different family members were incredibly realistic and the main characters are originally from the Dominican Republic, so it’s a great book in terms of cultural diversity.

PASTRY: Shortcrust pastry can crumble easily. Pick a character who you initially liked, but as you read more and more, your relationship with them crumbled apart.

For this question, I have to go for The Darkling from the Grisha trilogy. I’ll admit, I haven’t read the final book yet, but based on what I’ve read so far, I went from liking his character in the first book, so despising him with all my might in the second. I won’t go into too much detail, as I don’t want to spoil anything for anyone who hasn’t read the series, but his ambitions and treatment of certain characters made me want to reach into the book and push him into a lake. Read my review of Siege and Storm (the second book in the Grisha trilogy) here.

VICTORIAN/OLD-FASHIONED BAKES: Recipes from the past that still taste delicious today. Pick your favourite classic novel.

This was a tough one, as there are quite a few classics that are dear to my heart, but in the end I went with Jane Eyre because it was dark, enigmatic and full of drama. Jane narrates the story from her unique perspective and is refreshingly independent for a 19th century female character.

PATISSERIE: You’re eating a chocolate éclair but there’s barely any filling inside. Pick a book that lacked substance and fell flat.

I started watching The Chronicles of Shannara on TV before I decided to read the book and had pretty high expectations going in. Sadly, the book reads like a less-exciting version of The Hobbit, with more dwarves, less action and no hobbits. The TV show is full of drama (love a good bit of drama) and tense fight scenes, but the book doesn’t offer much of this at all. It’s a quest-style novel, so while I expected there to be a good deal of travelling, I didn’t count on it being so dull. This was one instance where I preferred the TV show to the book. Read my full review here.

CHOCOLATE: Chocolate is a comfort food for many people. Pick a book you could read again and again and still find comforting.

The Book Thief is one of my all-time favourite novels and I will never stop recommending it to people as long as I live. This book gave me so much joy, so much sadness, and so much appreciation for good story-telling. I could read this book every year for the rest of my life and never get sick of it.

THE GRAND FINAL: Everyone is out to impress with extravagant show-stoppers! Pick your favourite book of the year so far that really impressed you. 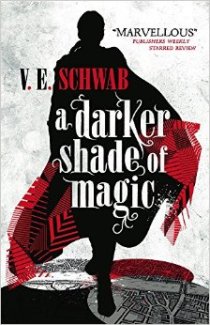 Just in case you didn’t know how much I love this book, I SERIOUSLY LOVE  THIS BOOK. I read A Darker Shade of Magic earlier this year and it just blew me away. The characters, the world, the magic – everything about this book is a showstopper. If this book were a cake, it would win Bake Off. Read my full fangirl rant, I mean review, here.

I had a lot of fun with this tag and I’m going to tag:

Ashleigh @ A Frolic Through Fiction

If any of you guys don’t watch Bake Off and therefore don’t fancy doing this, that’s totally fine!

For anyone who does watch Bake Off, feel free to hit me up with a comment or message because I NEED to talk about last night’s episode!

8 thoughts on “The GBBO Book Tag”