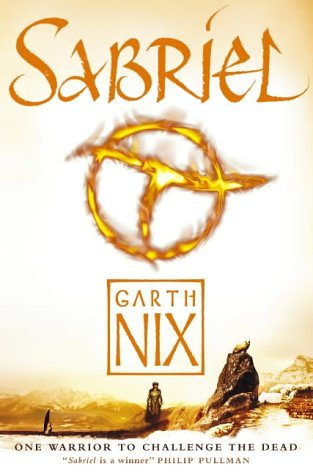 I’d been eyeing up this book on my housemate’s bookshelf for the past few months, and I finally picked it up a few weeks ago. It was everything I’d hoped for.

Sabriel is the first novel in the Old Kingdom trilogy, and follows a young girl who has the power to ‘go into’ death and bring creatures, or people, back from it. Sabriel is attending Wyverly College, a magic school in Ancelstierre. But when her father, Abhorsen, a Necromancer with the power to send demons who have returned to life back into death, disappears without word, she must journey into the Old Kingdom to find him.

Above all else, Sabriel is a brilliant character. She is calm, filled with a quiet courage, and never complains about the trials she has to undertake. As a protagonist, she’s very understated, but immediately so easy to like. I didn’t feel I empathised with her as much as I have with protagonists in other novels, yet this didn’t bother me at all, and didn’t stop me from liking her A LOT. She seemed like an old soul in a young body; a solid presence who understands the gravity of every situation she finds herself in.

I liked Touchstone’s character even though I thought his origins were a little predictable, and never quite got used to his name. It was just a little too abstract. Mogget annoyed me and amused me in equal parts. He was a free magic construct bound into a cat’s form which is a brilliant idea for a character (I interpreted this as a nod towards the idea of a witch’s familiar), and he obviously had tremendous power, but rarely used its full potential to help Sabriel. At the same time, he obviously cared for her (despite pretending otherwise) and came out with witty wisecracks that made me fond of him by the end of the novel. His true power is never quite explained, so I do wonder if that will be revealed in Lirael or Abhorsen.

One of the novel’s high points is that its magic system is unique, but never fully explained. This added a great deal of mystery and unpredictability to the plot, and offered potential for expansion of the story world in later novels. I also really liked the way death was constructed as a place, rather than the end of being. Sabriel’s ability to ‘go into’ death, and the subsequent frost that covers her body while there was one of my favourite aspects of the novel. The idea, too, that there are different ‘gates’ in death, and that you’re only truly dead once you pass through the ‘final gate’ was a very cleverly-illustrated idea.

The one aspect of the book I had issues with was the growing romantic attraction between Sabriel and Touchstone. To me it seemed to happen too quickly; one moment they’re just travelling companions and the next it’s all ‘oh you have such beautiful eyes, wait I think I love you’. Don’t get me wrong, it wasn’t as bad as some of the insta-love I’ve read in YA novels. In fact, it wasn’t bad at all. It just didn’t feel necessary to the plot or the characterisation. As friends and travelling companions their relationship was perfectly interesting and engaging without adding romance into the mix.

But overall, this was such a great book. The plot, world-building, and characters were all completely unique and riveting. I know the sequel Lirael doesn’t follow directly on from Sabriel, and I’m sad not to be able to read more of Sabriel’s adventures, but regardless, I’ll definitely pick Lirael up because I enjoyed the first book so much.